Yup, you read that right. I put cheese in this batch of cider at the bottling stage then let it sit at room temperature for several months to age.

"Certainty of death. Small chance of success. What are we waiting for?" - Gimli

Cheese pairs well with apples. As in "baked brie and apples". Yummy! Not that I think just because something pairs well means it needs to be in the drink. However, cider, unlike wine, can be a little boring, and is just waiting to have some kind of embellishment added, be it cranberries, ginger, currants, or, in this case, how about... Cheese?

Will it turn into a deadly toxic sludge like when the jug of milk spills in the back seat of the car to spoil in the heat of the summer sun? Or will the alcohol in the cider be sufficient to prevent spoilage from occurring? And if spoilage is avoided, what will be the result? Something gross? Tolerable? Good even? Keep reading to find out.

I bought 4 bags of Ruby Mac apples at Devoe’s Orchard (which total about 2 bushels). I already had a half bag of what are probably honey crisp or something similar.

I cleaned and sanitized a brand new 6-gallon(!) carboy and pressed cider to fill it (which took almost exactly four bags which is roughly two bushels). The Mac apples pressed much more nicely than the mushy honey crisp which made for a lucky break. The pressing took about two hours probably would have taken a lot more time and effort otherwise. The 6-gallon carboy is totally filled. The cider’s specific gravity is 1.040, for a potential of about 5%. The cider tastes really smooth, rounded and delicious. I put it in the cool room with a cork to sit for a day or two and let any sediment settle to the bottom hopefully, after which I’ll switch it to a second 6-gallon carboy minus the sediment to ferment.

Very little sediment settled out. I transferred the cider to a second 6-gallon carboy. I ran into a few frustrations (the airlock wouldn’t stay unless I dried it with an unsanitized paper towel), which made the process not worth it. I think next time I should skip the transfer and just ferment in the first carboy without transferring. It’s hard though - sometimes there’s a ton of sediment right away. Also, I brought it upstairs, and boy is the 6 gallon carboy heavy. It sloshed around quite a bit, so I don’t think I want to bring it downstairs to transfer to a keg. Instead I should just leave it upstairs and complete the transfer to the keg, without hauling it downstairs first.

It took a few days to really start bubbling, but now it’s going strong. The top surface became a half-inch layer of brown oxidized cider, I’m not sure what was up with that.

29 seconds pass between bubbles in the growler airlock.

6 seconds pass between bubbles in the 6-gallon carboy.

12 seconds pass between bubbles in the 6 gallon carboy.

This cider is driving me nuts. At this point, I have kegged and and carbonated the *next* batch, C17, but this cider is still slowly bubbling away. But what can you do? This is a slow-brewing cider. No idea why.

I’m seeing 50 seconds between bubbles in the 6-gallon carboy. I siphoned it in the guest bedroom to a 5-gallon keg, applied some co2 pressure, and put it away in a room-temperature room to continue to ferment. It’s upstairs in the closet at the moment.

After letting the keg sit at room temperature for a few weeks, I bottled the entire 5-gallons. First I filled 16 12-ounce bottles and 8 fancy 500ml bottles, as well as a big 1.5L bottle with hard cider: 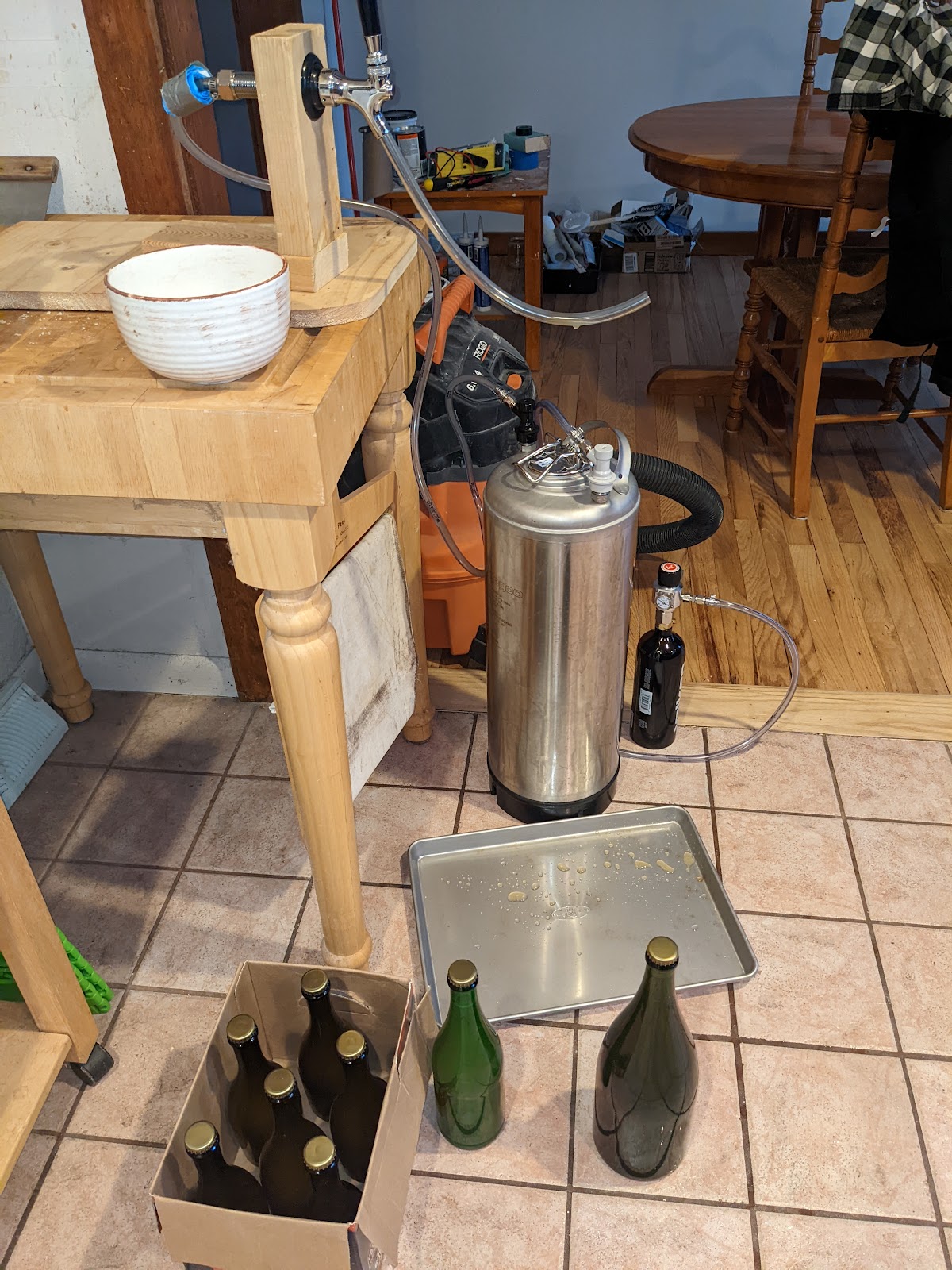 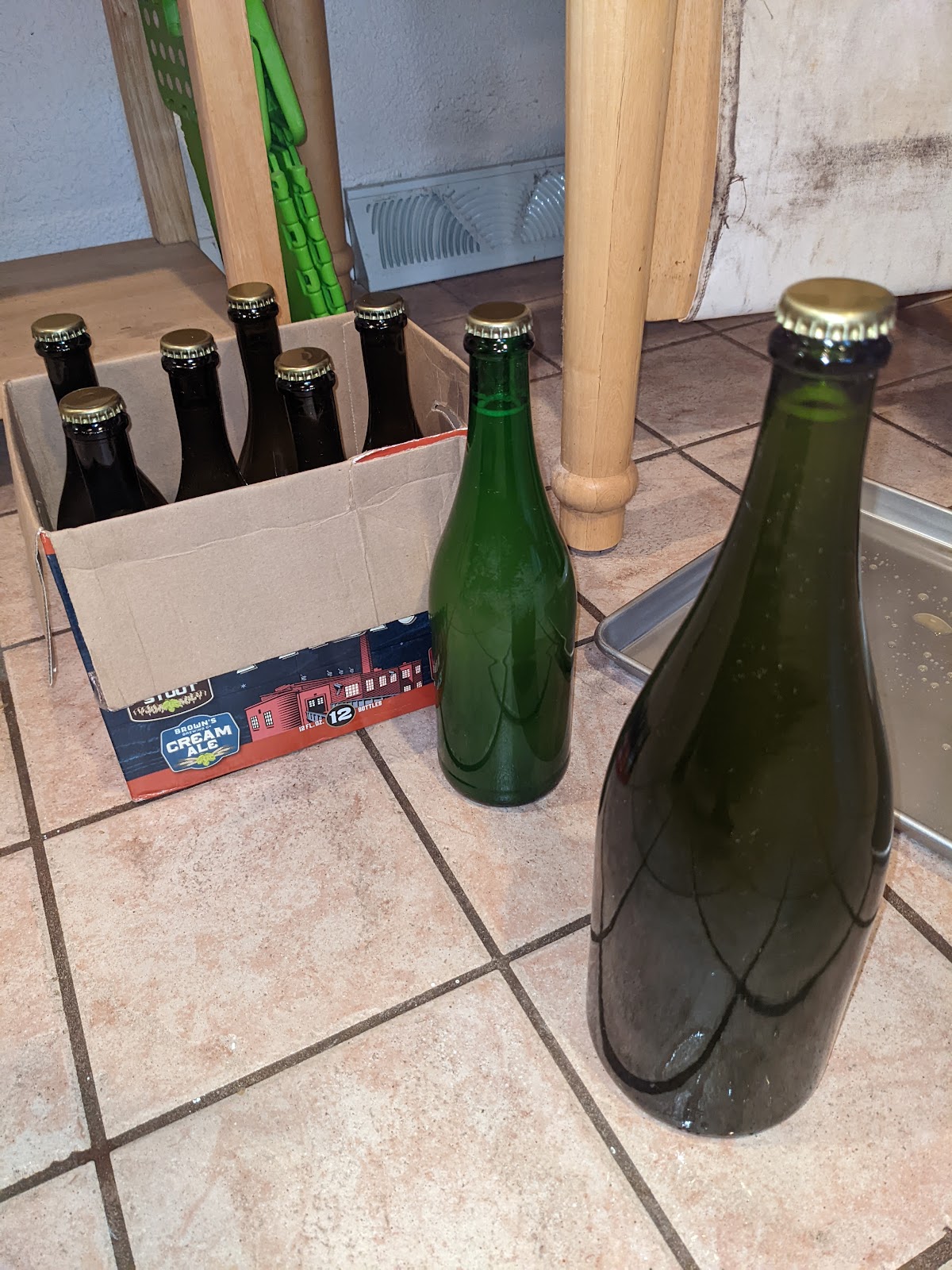 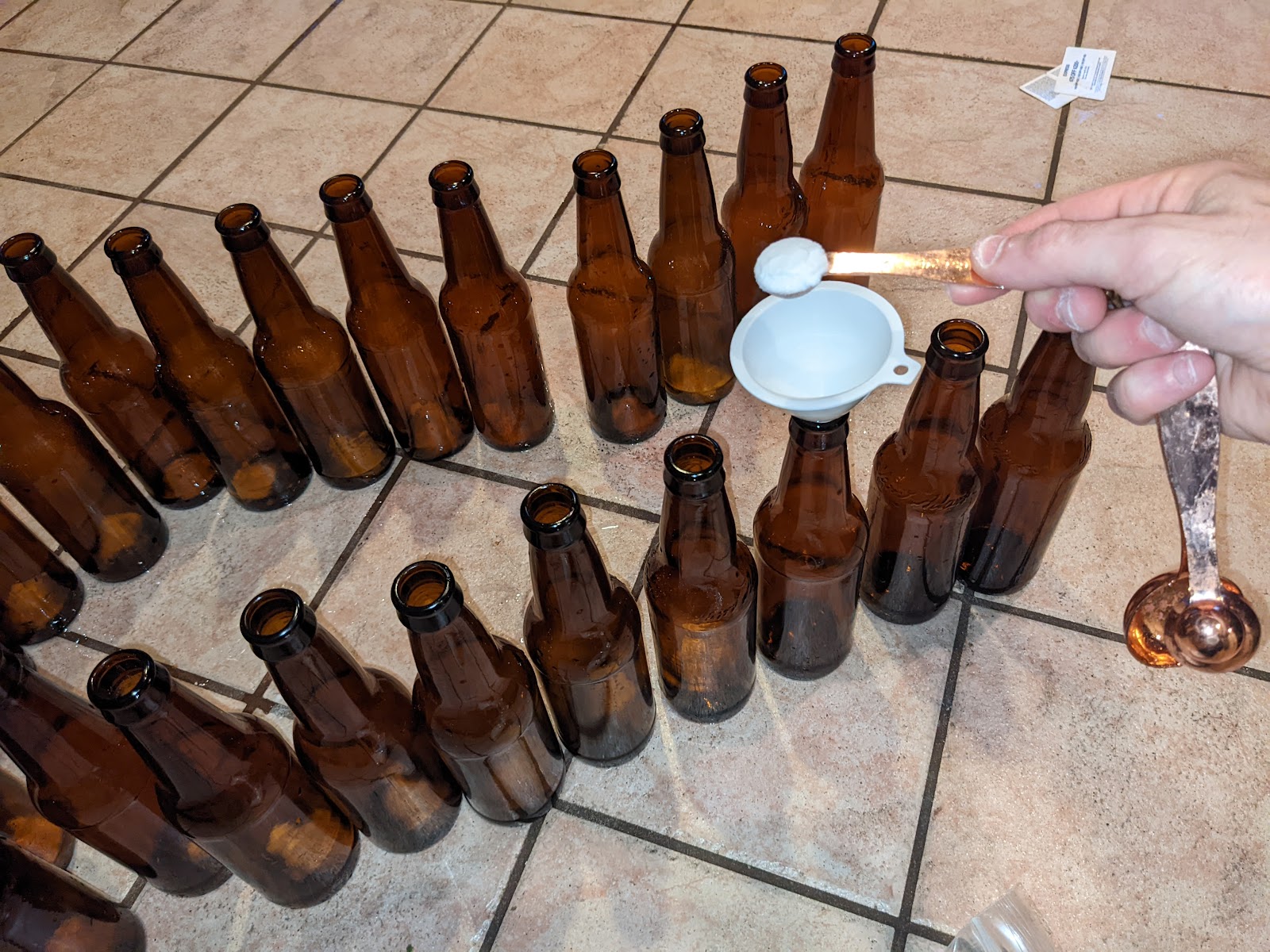 I put a chunk of parmesan cheese in 12 bottles, then filled those with the fermented cider. This Parmesan Cheese Cider is an experiment with an incredibly high likelihood of disastrous results. But there is a chance, albeit a slim one, it won’t be awful. And if it’s not awful that will be exciting, no? 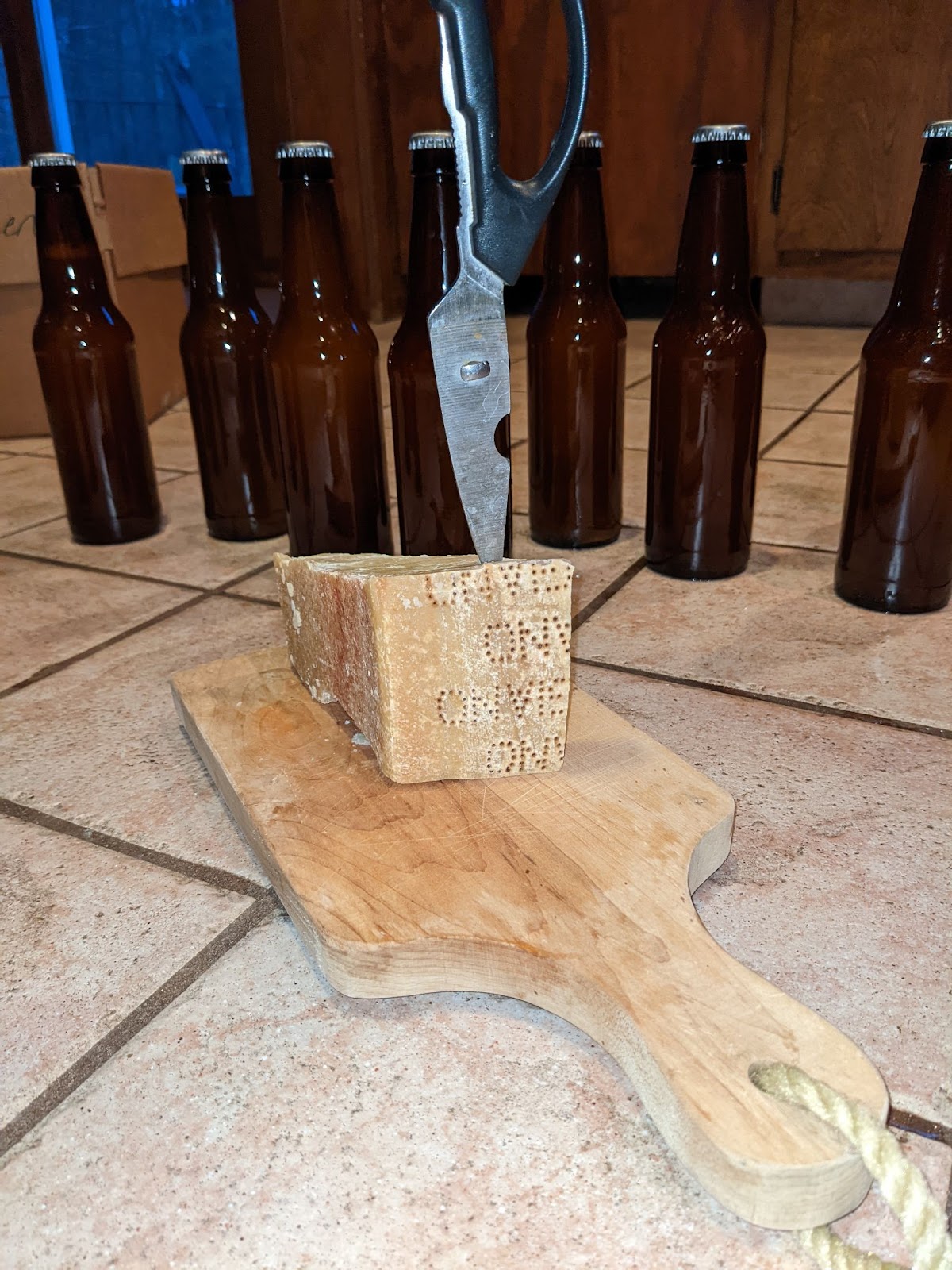 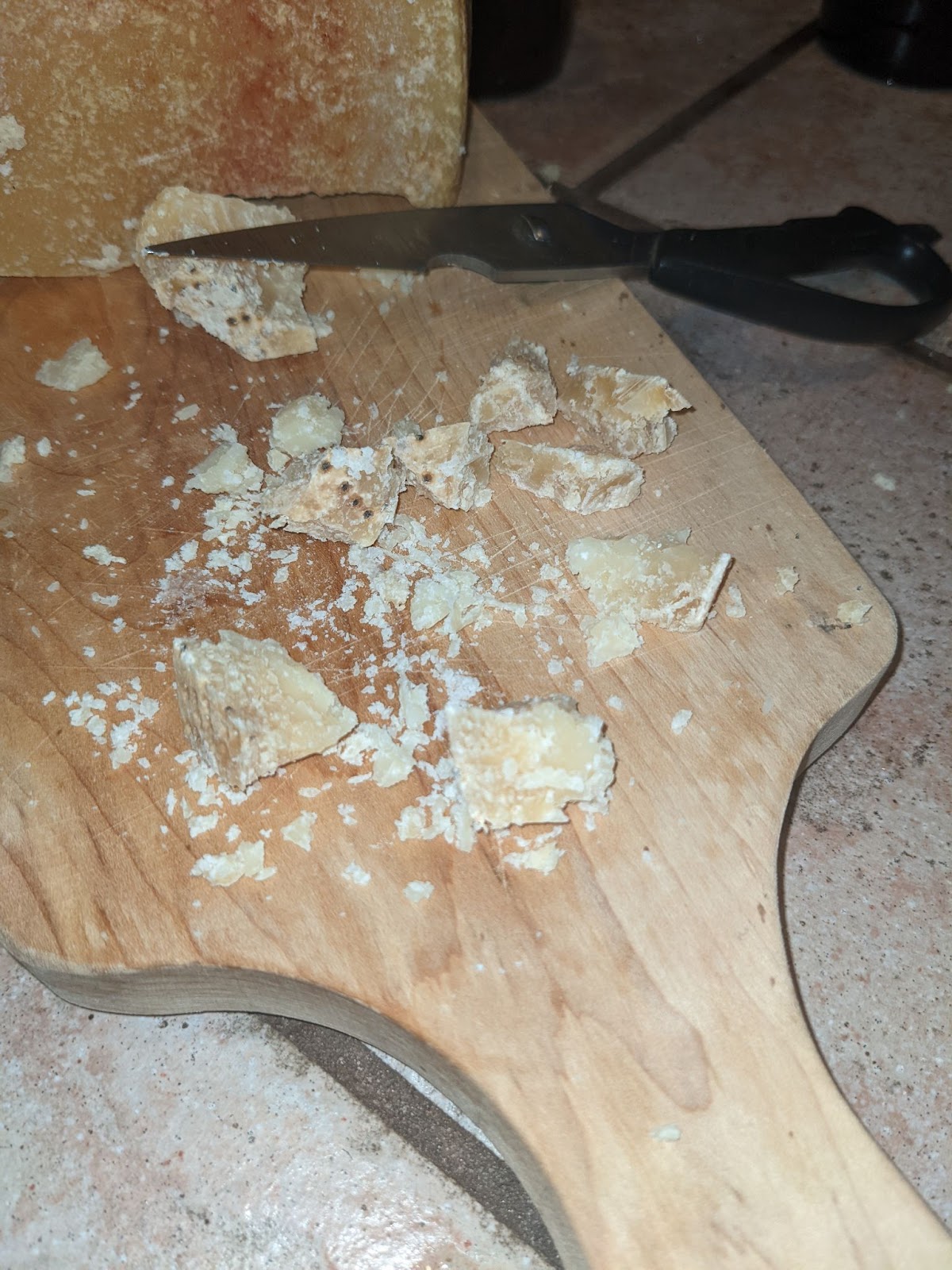 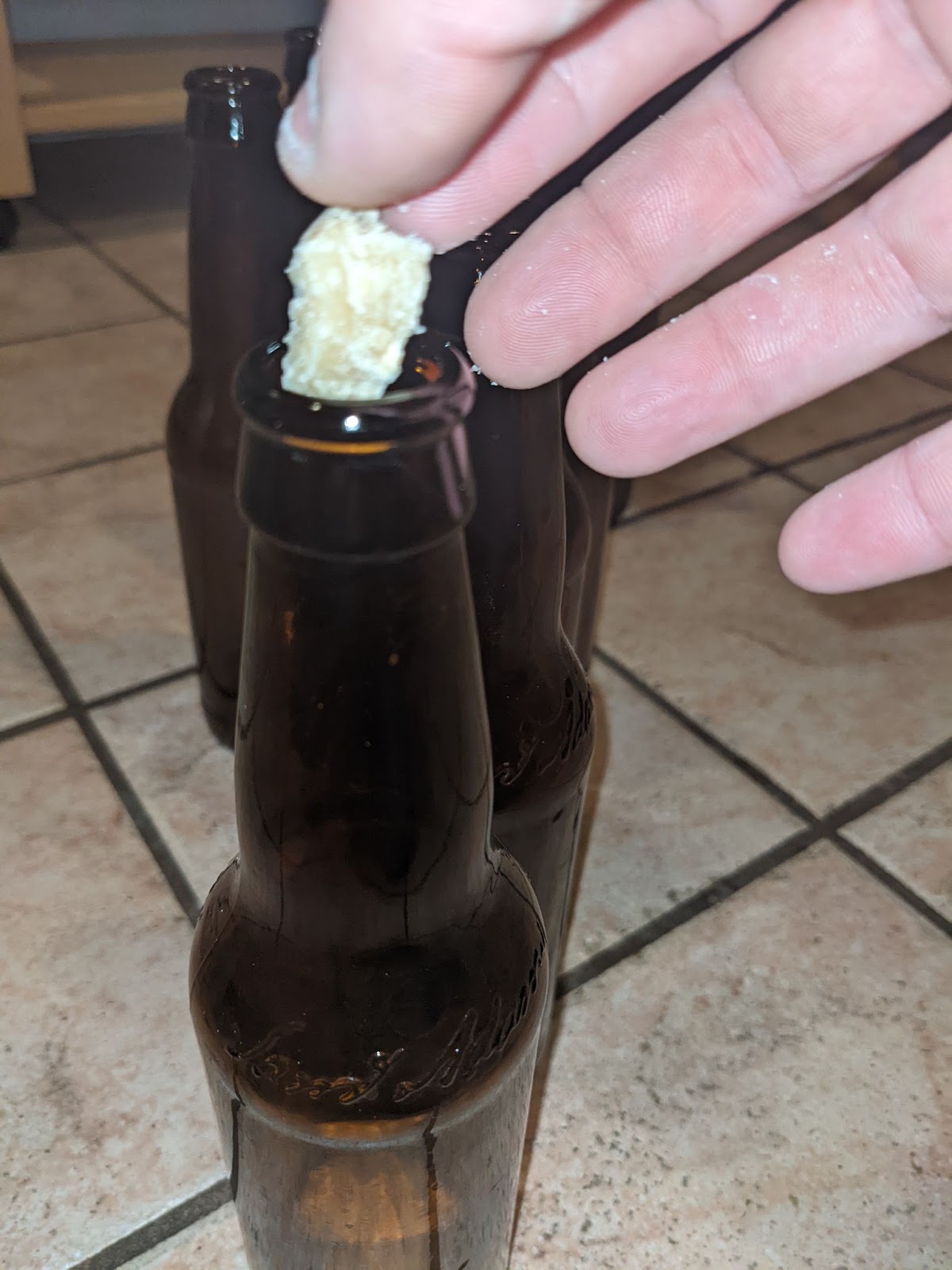 Four months have passed since bottling the cheese cider. I was having a hard time convincing anyone that we should so much as open one of these bottles in their presence. Finally H agreed that we could open one, and commit to at least smelling it. We opened a bottle, and it smelled... O.K.! Cidery, with maybe a slight hint of cheese, and not in a bad way.

I poured the cider into two small wine glasses. The first thing I noticed is that a thin disk of solidified fat from the cheese sealed the surface of the cider, much like solidified fat that forms when you put chicken soup in the fridge. I ate that first, and it melted in my mouth like a snowflake. There was nothing particularly good or bad about it.

The cider itself tasted like a decent hard cider. Again, there was nothing particularly different about it except that it maybe had a very slight and not unpleasant hint of a good cheese to it.

I think H and I both agreed, the cheese neither made the cider better nor worse. Although given that, I'm not sure anyone would reach for the cheese cider first when given the choice. 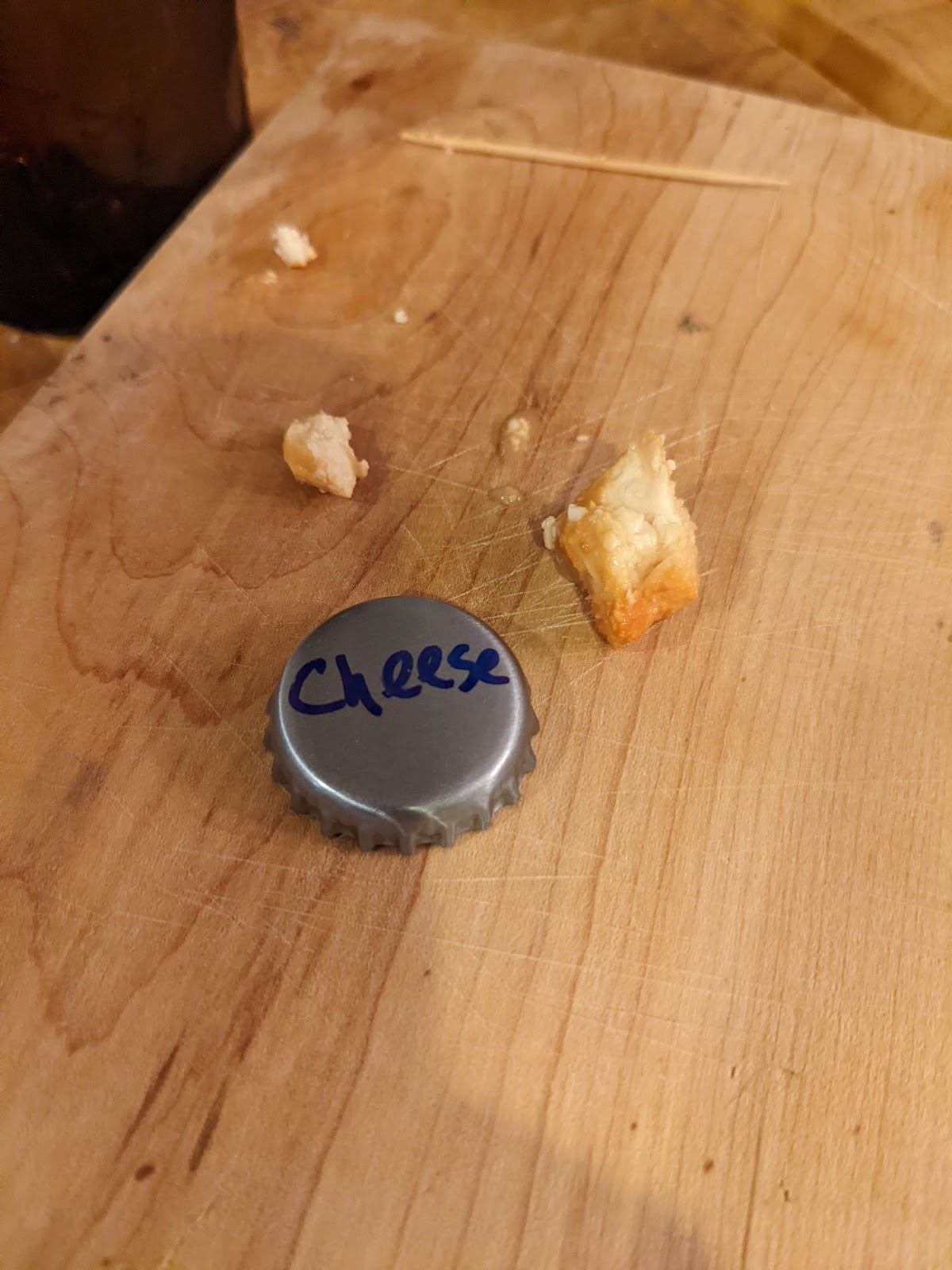 So there you have it. A successful experiment. And we have several bottles where that came from if anyone is eager to try some!

I tasted a bottle of the un-cheesed cider. It is light in carbonation, color, and flavor. It tastes like a mild and dry white wine from an unfinished bottle that was re-corked from the night before. I'd rate it 6.5 out of 10. It is cold and mild, definitely drinkable. But it really brings nothing of value otherwise. Might be better with, I dunno, some cheese. 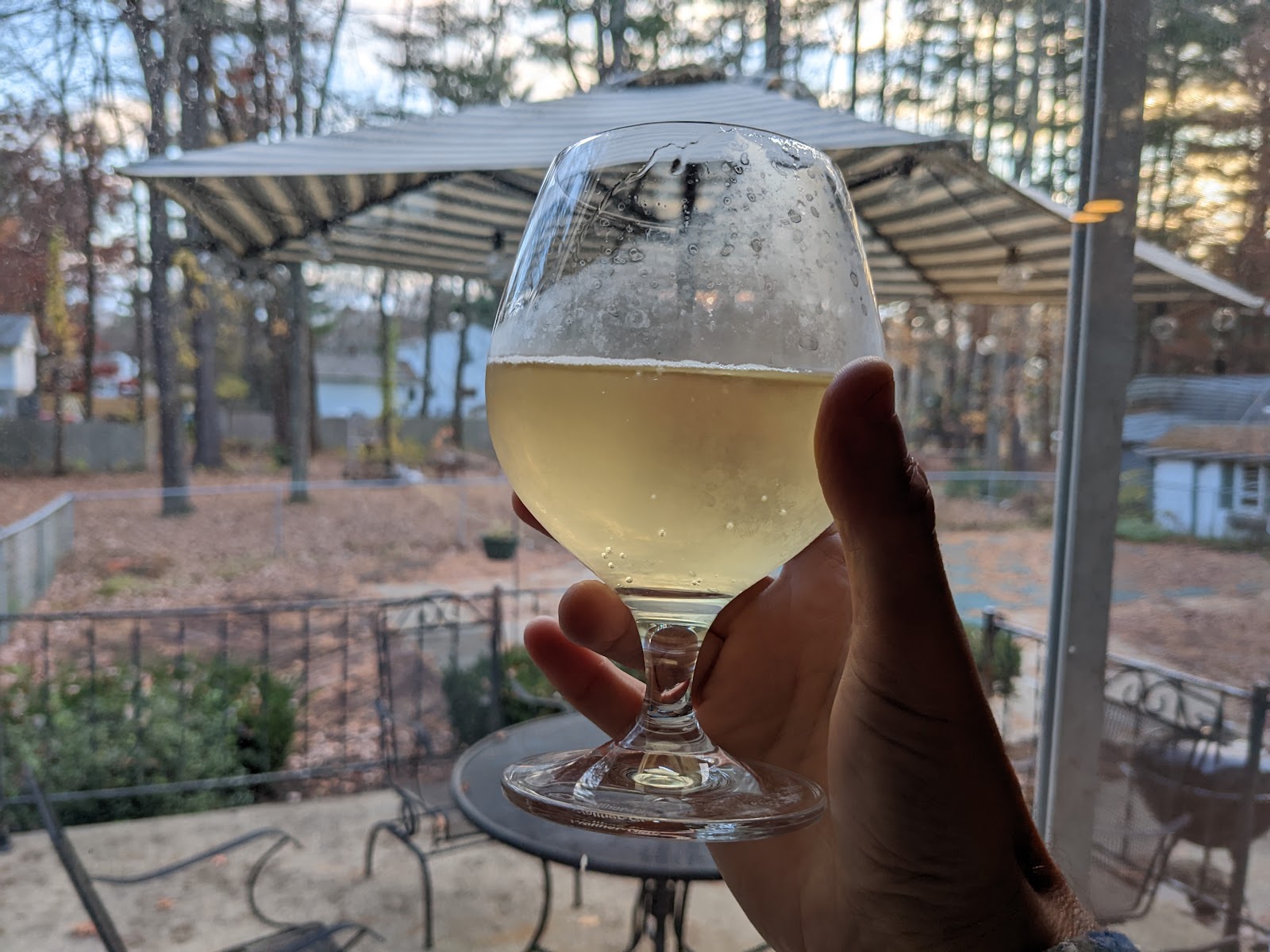 Enjoyed another bottle of parmesan cheese cider with S yesterday. It was again, reasonably enjoyable with a subltle but distinct cheese aroma and flavor. We discussed a book I'm reading, which includes mention of cheese in wine:

"One of the earliest evidences of wine in Greece is as part of what archaelogist Patrick McGovern has dubbed 'Greek grog,' a sweet blend containing fermented grape juice, beer, and honey drunk by the Minoans on Crete. This seems to be like the brew served in Nestor's massive gold cup in Homer's Iliad, described there as a blend of wine, barley meal, and honey, topped with - of all things - cheese" - Lukacs, Paul. Inventing Wine, p. 17.

And to quote The Iliad (although this just seems they are adding cheese to wine immediately prior to drinking it):

Next her white hand an antique goblet brings,
A goblet sacred to the Pylian kings
From eldest times: emboss'd with studs of gold,
Two feet support it, and four handles hold;
On each bright handle, bending o'er the brink,
In sculptured gold, two turtles seem to drink:
A massy weight, yet heaved with ease by him,
When the brisk nectar overlook'd the brim.
Temper'd in this, the nymph of form divine
Pours a large portion of the Pramnian wine;
With goat's-milk cheese a flavourous taste bestows,
And last with flour the smiling surface strows:
This for the wounded prince the dame prepares:
The cordial beverage reverend Nestor shares:
Salubrious draughts the warriors' thirst allay,
And pleasing conference beguiles the day."