As soon as this year started, I had already committed to more running races than I could possibly imagine. With the Boston Marathon kicking off the season, I fully expected to be broken and battered for a month or so afterwards, leaving me a step behind my training for the rest of the season, and creating an awful downward spiral. I imagined I'd be digging myself out of a deep hole before spring ever started. I was happily surprised to get through Boston unscathed, back to relatively normal running after little more than a week of recovery despite some major tightness after my calves cramped up on me during the marathon.

I had plans to run the Seven Sisters Trail Run 2 weeks after Boston. After 6 days of recovery from Boston, I headed out for a Moreau Lake 15k trail loop and faked my way through, pretending to be ok despite running on unforgiving steel legs well beyond the stiff and sore stage. However, I had to do something to ease my way back into tough trail runs. Either suffer now, or suffer a week from now. Better to take my lumps as early before the race as possible and give myself a full week to feel somewhat regular again. As the week wore on I went for more cautious, sensible recovery runs. But then, the day before the race, B suggests a 12 mile run. I try to wrap my head around the thought. Between 3 weeks of tapering then recovering, I've been holding back for well over a month with nothing to show for it except a few hours of marathoning. You know what? Screw it. Not just it though. Screw it all. Screw tapering, screw recovering. Not just tomorrow, but ever. 12 miles? Let's do it. Fast.

Somehow the name Dean Karnazes got into my head. Just the name alone was enough to make me realize that there is so much more my body can do, and the only way to get there is to let go of limitations. I've been carrying this attitude with me for the last 5 weeks or so. After 7 Sisters, I just exploded. I starting commuting to multi-hour mountainy trail runs, day after day. For the first time, I ran a few 75+ mile weeks, including many tough days (Moreau, Grafton, Tongue, local trails). I threw in a 28 mile run for good measure. Followed by 16 hard trail miles the next day. Two weeks before the Lake Placid Marathon.

I justified all of this by saying I'd run Lake Placid as a training run. I'd run barefoot, and take it easy and just run it for fun. But then a day or two before the race, I was looking over previous results, thinking "holy smokes, if I go all out, I could stand a chance of doing pretty well at this race!". I made the last minute decision to wear sandals and run my face off.

The night before the race, I felt my usual pains, nausea, etc. this time with a headache as an added bonus. I know enough now that I can ignore the phantom pains because once I start running I will feel 110%.

At the starting line I stand near the front, where half marathoners and full marathoners are all waiting to begin. I see some familiar faces, lots of Capital Region runners are here today. In fact I see some runners who I know can kick my butt, but they are wearing half marathon bibs. The gun goes off, and we take off up the first of many small hills. Everyone will be going too fast at the start, so I need to totally back off more than I feel like is necessary and I will *still* be going too fast. So I hold back and stay at a very comfortable pace and watch as 2 or 3 really fast guys run off way ahead, leaving pack of 10 or so runners a short distance ahead of me. I keep a comfortable pace. I look back and see random scattered runners behind me. I look forward at the pack. Dangit, there's a bit of a headwind, and if I join the pack I can go for a free ride for a while, but I'll have to speed up to catch up. Ugh. After a few minutes I catch up to the pack. There are a bunch of ironman shirts, and everyone is conversational and friendly. A few hundred feet up ahead is a guy in an orange shirt and just ahead of him are two dudes on bicycles in reflective vests. Orange shirt must be the leader for the full marathon, and the bicycles are keeping him on course. The pack slowly starts to break apart a little, a few guys run off ahead. I'm towards the back. A few miles into the race, we come to a nice comfortable downhill. When running barefoot or in sandals, it's really difficult to put on the breaks while going downhill. Barefoot Kenbob has a nice quote where he basically simply says, "why are you putting on the brakes"? I've been practicing the art of quickfeet down hills. It's so much easier than trying to slow down. And so much faster! With no effort, I find myself blazing past everyone in the group. 2 runners stay with me, and we stick together for the next several miles, overtaking the marathon leader.

Both runners are super friendly. One is from Quebec and has a real way with words. He gets everyone talking and having a great time. The other is from the Utica area. He was the second place finisher during last year's thanksgiving run in the snow, so he and I had met before. Everyone was totally upfront about their race plans, nobody seemed to be playing any kind of competitive mind games. Both kept reiterating we were running too fast. Me? I forgot my watch so I was dying to know what they were talking about. What is our pace? I refused to ask. If I wanted to know our pace all I needed to do was to NOT FORGET MY WATCH. Not hound all the other runners around me. We stuck together for a while, but I around mile 7 or so I started creeping slowly ahead.

I hit the first turnaround at mile 9. From this point onward, huge masses of other runners are running in the opposite direction. And I can't begin to tell how much energy everyone shared! Being the first marathon runner, people were clapping, cheering, and encouraging me the whole way. It was all I could do to try and return the favor. So I found myself in the unique position to be clapping and cheering, hooting, smiling, pointing, waving, and hollering for the next 17 miles or so.

And I felt great. Around mile 10 I felt a calf that wanted to cramp up followed by the slightest warning of soreness in my ankle. But I recognized those signs clear as day: low blood sugar. My brain is getting tired and it's way of letting me know is to point to different parts of my body and say "ow! see? We need to stop!". That just means it's time to suck down my first honey goo packet which I have safety pinned to my shorts. I eat one, drink a little water, and all is back to normal.

The course is great with plenty of hills to keep it interesting. The dude on the bike stayed with me to the end, always looking back to make sure he was a perfect distance ahead. It was great being in the lead because I could run at a comfortable pace. During any other race, there are people ahead that I constantly want to catch up to. But now, I'm better off keeping some extra energy in reserve so that if somebody catches up to me I have enough energy to feel fresh after he's been pushing hard to catch up. At the same time, I keep some pressure on myself, realizing that complacency will mean losing the lead I have.

I get to cheer on lots of people along the way, sometimes with high fives at the double yellow lines in the middle of the road: B and R who are running the marathon. M and her friend P running the half marathon. I could go on and on about the inspirational events in the race, like this guy.

Hoards of runners and spectators cheered, but one thing really stands out that I'm having difficulty coming to terms with. I really hope I didn't just imagine it or make it up or worse, mistake one thing for something else. As I was approaching the final mile or two, a small group of people got on their knees and were bowing to me! On the pavement! What the...?!? I want to erase this so bad. I can't believe I'm writing it, I feel like just by saying it it makes me the most absurdly narcissistic person on the planet. I'll tell you this: it's a strange feeling to have an effect on people and get this kind of reaction by just running. As I was sitting at my desk the next day, struggling with day-to-day computer I.T. problems it's crazy to think back to yesterday when people were voluntarily bowing in front of me. Absolutely ridiculous. Just when I thought I'd heard and seen it all.

The final section of the race is a super steep hill climb with a pre-victory lap around a high school track before crossing the finish line. I got to break the tape, what an awesome feeling. 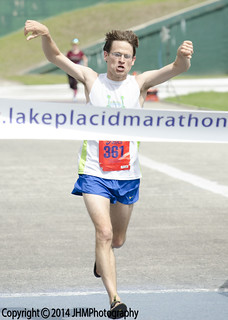