In a world where technology is surpassing human capabilities, it is crucial that we live with intention. Are we destined to become like Krang, the evil leader of the Ninja Turtles Foot Clan, a brain in a robot suit? By making purposeful choices, we can ensure that we are not simply passengers in the driverless car of technological advancement, but rather, active players shaping our own eventuality.

I put some PBW in the carboy and bucket this morning, and let things clean while I was at work. I slipped out a little bit early in the afternoon and picked up 2 bushels of apples at DeVoe’s. I must be getting the system down because I made quick work of sanitizing everything then filling the 6-gallon carboy, a 1-gallon carboy, plus a little extra. Also the apples were easy to press because the cider just fell out of the ground apples. I added pectic enzyme immediately after pressing. It’s my first time using pectic enzyme. The specific gravity reading suggested an alcohol potential of 5%. The resulting cider is good, but not the strongest in terms of flavor or sweetness.

Why pectic enzyme? A batch last year came out a little weird, with swirling clouds that I suspect are a result of pectin doing it’s thing. Also adding the enzyme may accelerate the process of clarifying the cider. I kind of like a cloudy cider, but the occasional clear one is good as well. Also I suspect there may be other benefits to adding the pectic enzyme such as encouraging the sediment to drop out more quickly, which I think is a benefit for my cider. The quicker I can get it off the sediment the better as far as avoiding off-flavors. That’s the idea anyway.

Wow just 2-3 hours later a ton of sediment has dropped out already:

There is a thin layer of bubbles on the surface, but it seems a little slow to take off. I added about 1.5 teaspoons (just a little) of yeast nutrient.

It sounds like you can add pectic enzyme earlier, to the ground apples to produce something like a 10% better yield because more juice will extract.

It's foaming quite a bit, if it keeps going it might blow its top. I gave it a little swirl to try and reduce the foam a bit.

The airlock is bubbling once per second, and you can see the fizz fixing to the surface. It’s going great so far!

It quickly slowed to 35 seconds between bubbles! I added about a teaspoon of yeast nutrient. It doesn't seem to have done anything after a few hours so maybe it just fermented quickly.

The airlock isn’t bubbling at all! There is a scant quarter inch of sediment. I moved it down to the ‘cold room’ to cold crash it.

I transferred the cider from the carboy into a 5-gallon keg. There was also enough to half fill a 1.5 gallon keg.

It looks like almost all the sugar is fermented which is good:

I hooked it them up to the c02 tank (in the picture there is also some plain seltzer hooked up) to get the process of carbonation started:

I shook the kegs for 5-10 minutes at roughly 18 lbs pressure to accelerate the carbonation process.

I bottled the cider from both kegs, yielding 2 cases plus a few bottles. 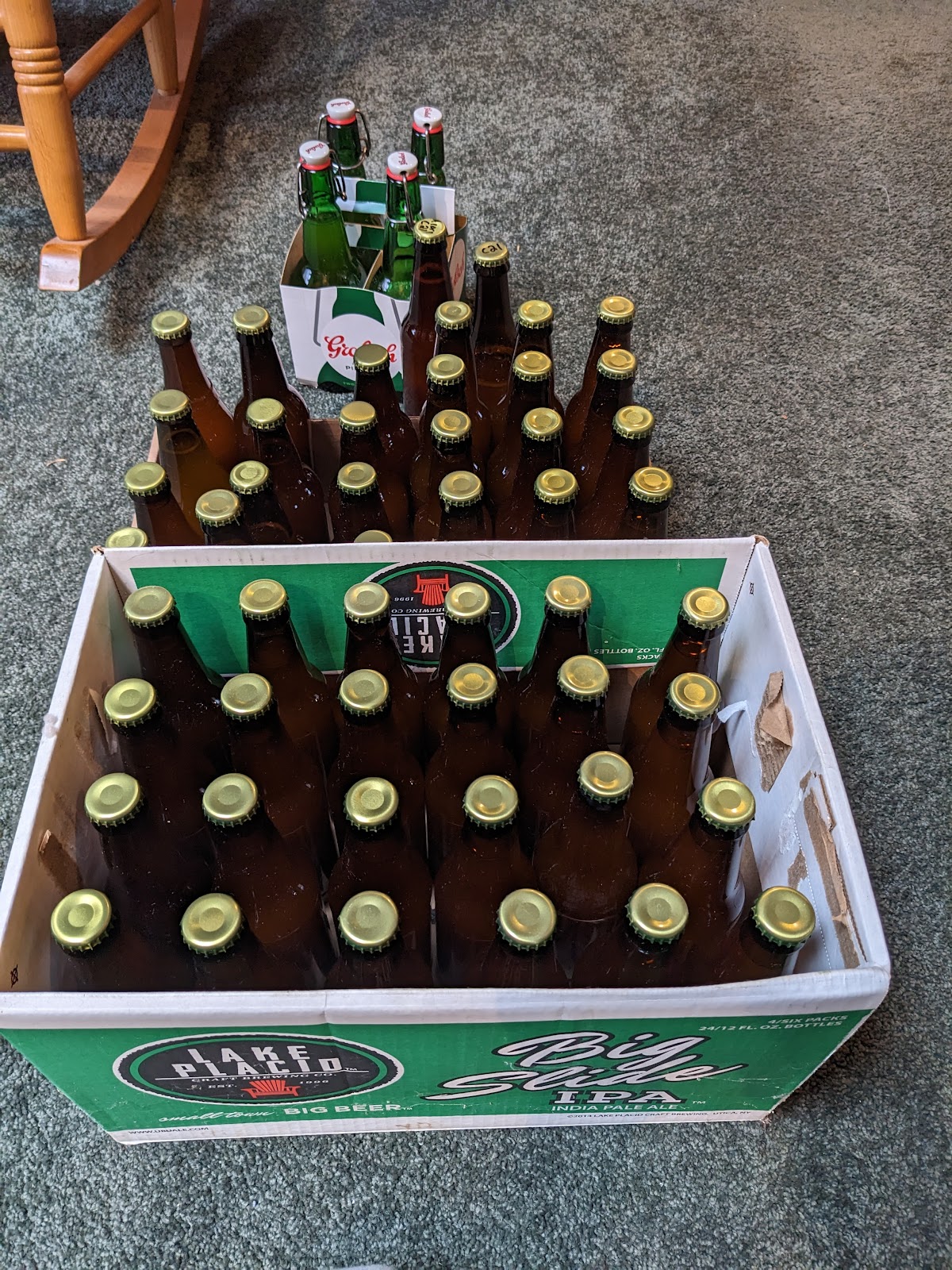