This cider was the favorite drink of Olaf Cheerbringer, a sorely missed childhood Dungeons and Dragons character. Olaf was a lute-playing bard who sadly never made it past level 1. May he rest in peace.

If anyone's curious as to where the image came from, it was generated by the latest artificial intelligence application (https://openai.com/dall-e-2/) by typing in, "3 bards drinking sparkling hard apple cider in the Renaissance style". Within about 30 seconds it spat out four glorious interpretations of that sentence, the above being my favorite.

I picked up 4 bags of apples at Devoe’s. A said they are Gala apples. They pressed very easily, and within a very short amount of time I filled the 6-gallon carboy, a 1-gallon jug, and about two 1-liter bottles. The cider is a rich, dark color, and some sediment started to drop out of it quickly. I did not rinse the apples. I did not sanitize, besides a quick spray of a few items. I did not add any yeast because the last few grape batches seemed to ferment so nicely without added yeast. Everything has been actively used recently, and is nice and clean in a general sense. The cider came out to a 6% potential according to a gravity reading. It tastes delicious. I put it upstairs and wrapped a blanket around it. I suppose the plan is to ferment the 6-gallon and 1-gallon batches for 10-14 days, then transfer to secondary to get it off the sediment. I can transfer both into a single 6-gallon carboy and hopefully fill it up.

The cider in the carboy has only barely shown signs of bubbling, and the gallon jug is showing no signs. This is in stark comparison to the batches with grapes I started a week or so earlier. I’m guessing that either the orchard apples are pretty much devoid of natural yeast, or the cooler temperatures we’ve been seeing is slowing the action. I lean toward thinking orchard apples probably need to have yeast added.

The carboy had several inches of sediment at the bottom. So I cleaned and sanitized a secondary 6-gallon carboy and the autosiphon, and transferred the cider off the sediment from both the gallon jug and the carboy into the clean carboy. I also took a quick taste of cider from each container, they were similar and tasted incredibly sweet and delicious, with no off flavors. I dropped in a packet of Red Star Premier Blanc yeast from the Homebrew Emporium in Troy, NY. I could immediately see bubbles float to the top, and within minutes there was a frothy foam on the surface.

The cider has been behaving well, bubbling steadily despite the fact the house has been quite cold because we didn't turn the heat on. I kept it upstairs in a closet wrapped in a blanket.

I cleaned (PBW) the transfer equipment and keg and bottles, then star san'd it all and gave it a quick rinse.

There was nary a half inch of sediment which is great. I transferred 5 gallons to a keg. I had 5 bottles extra, into which I dropped a half teaspoon of corn sugar, then filled the bottles with cider.

I also poured a small tasting glass. It always tastes a little funky at this stage, but this time the funk was very mild. It smells very appley but doesn't taste like much. I think some time will do it good.

The cider in bottles is looking very clear, particularly toward the top of the bottle, and also a little sediment has dropped to the bottom. I'll be happy to see this cider go crystal clear if that's how it turns out, which it looks like it might be: 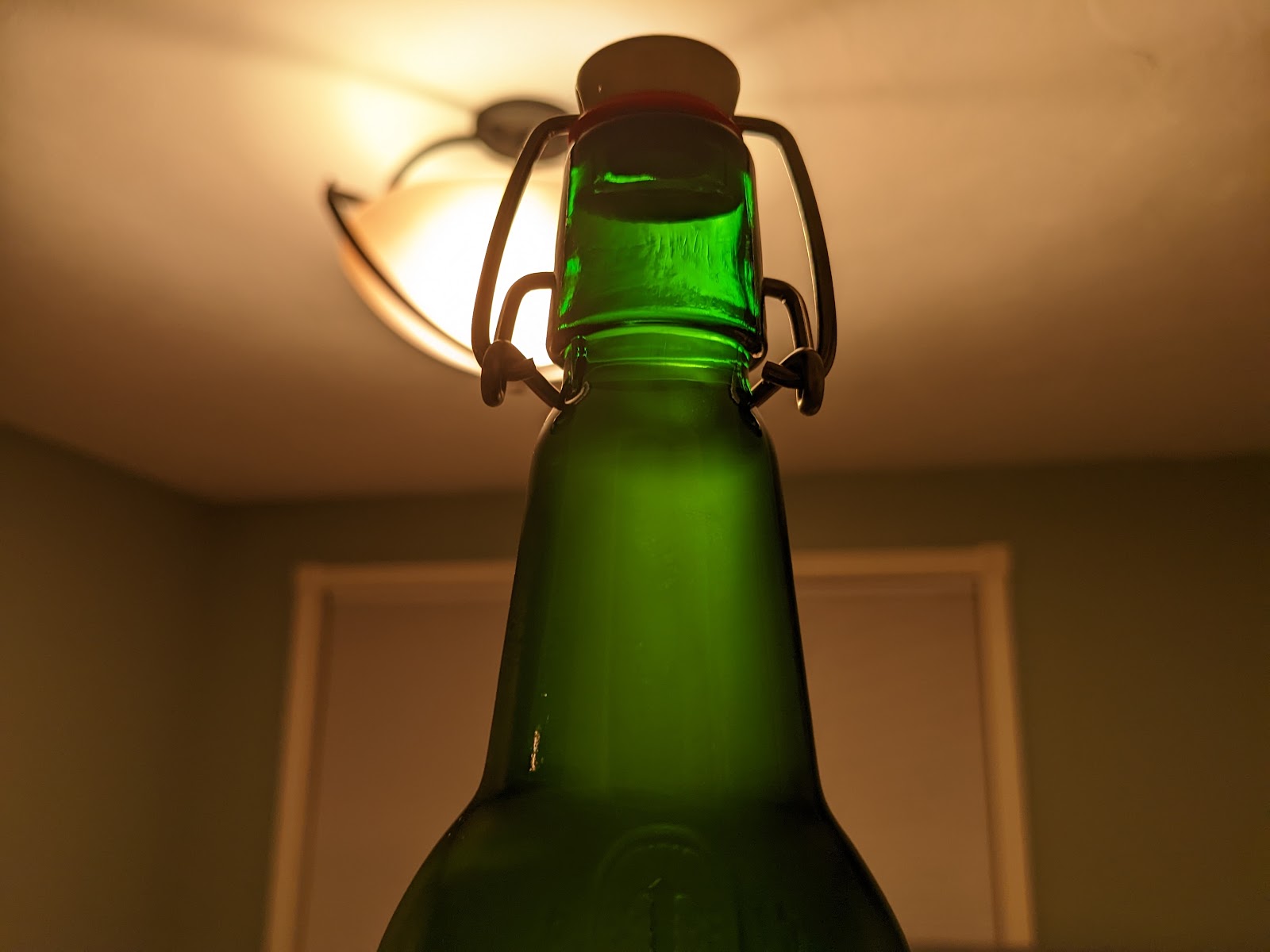 I chilled and opened a bottle. It had nice carbonation, and has a slight funk to it. 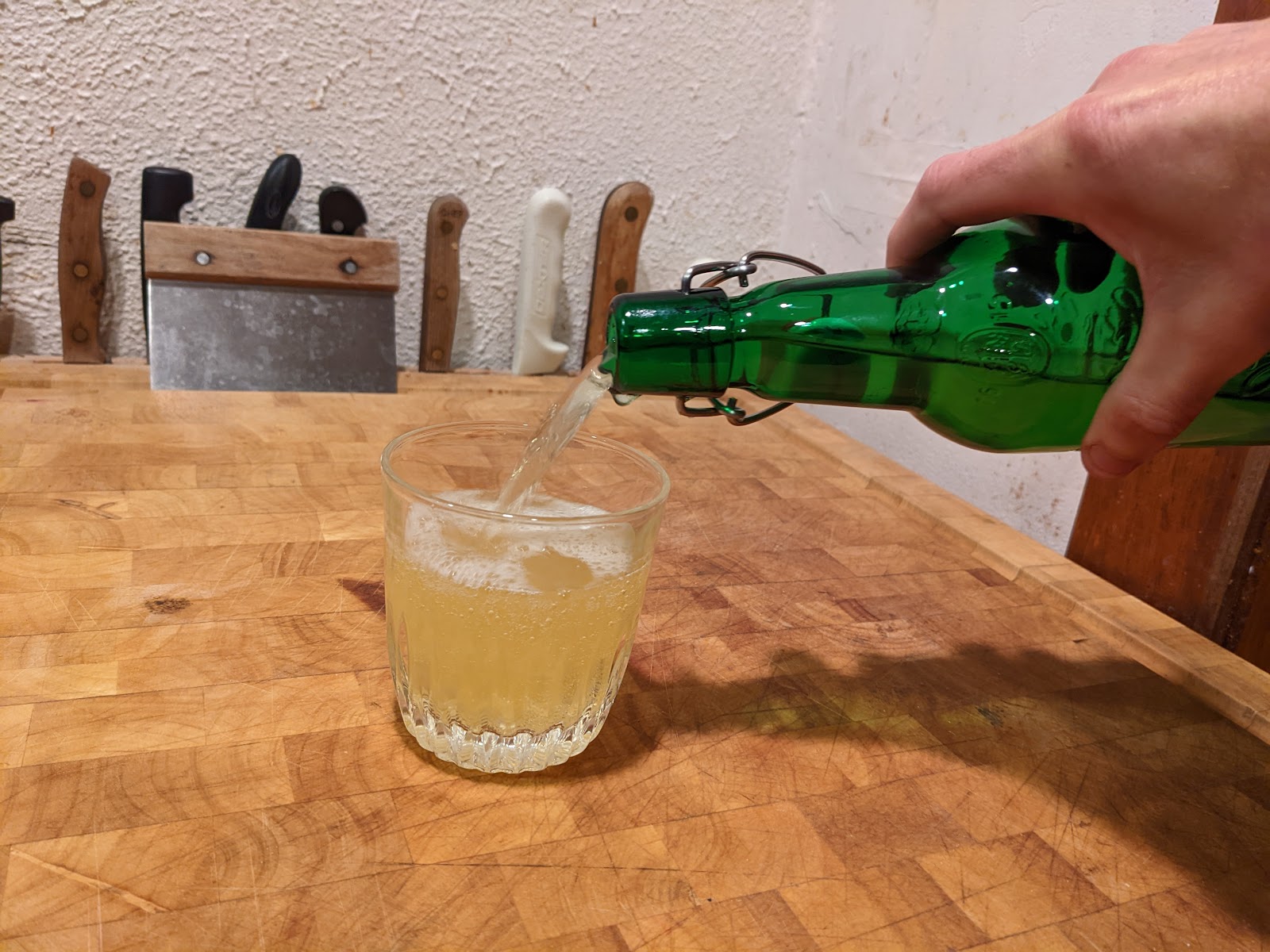 While a few bottles are conditioning upstairs, I transferred cider from the big keg to fill two mini kegs. I half-planned to fill bottles with some added corn sugar in order to bottle condition them. But then I read the "carbonating" section of a book I just picked up, "The Art & Science of Cider" and noticed that conditioning with sugar will always result in sediment, and by chilling and force carbonating you can avoid that nonsense. Also the fact that the bottle-conditioned cider (above) had a slight funk to it helped me decide to avoid repeating that process. So I decided instead to transfer to mini kegs which I can chill in the fridge and force carbonate, thereby avoiding sediment, and bottle later. 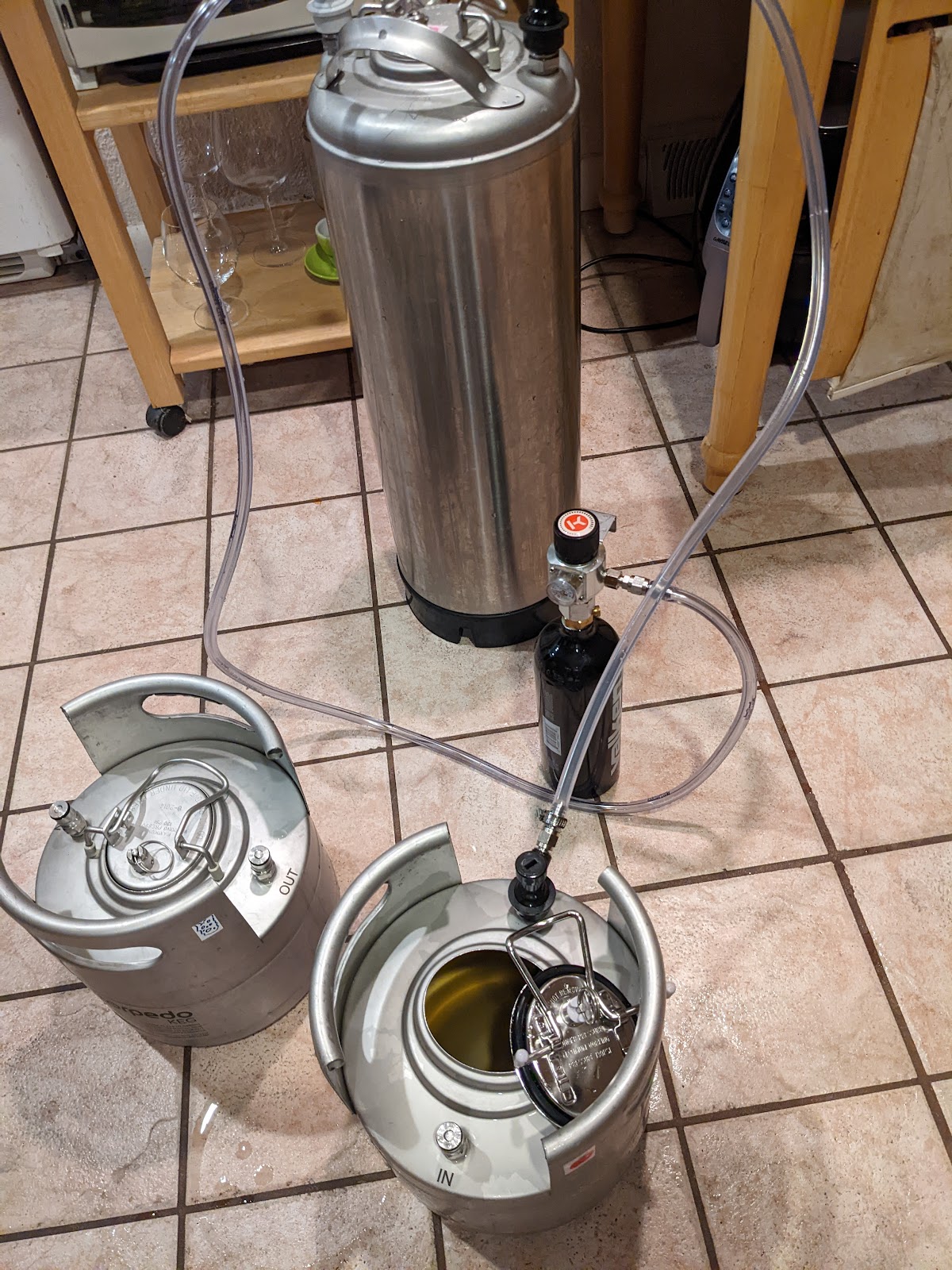 I poured one glass to see how it tastes. It's warm and hardly carbonated. Even still it's good with no off flavors to speak of. I'd swear I tasted hints of fresh baked pizza to be perfectly honest, just for a second there. It seems like a very ok cider. It's hard to tell since it's not finished, but this is an 8/10 so far, with potential to improve after chilling and carbonating. 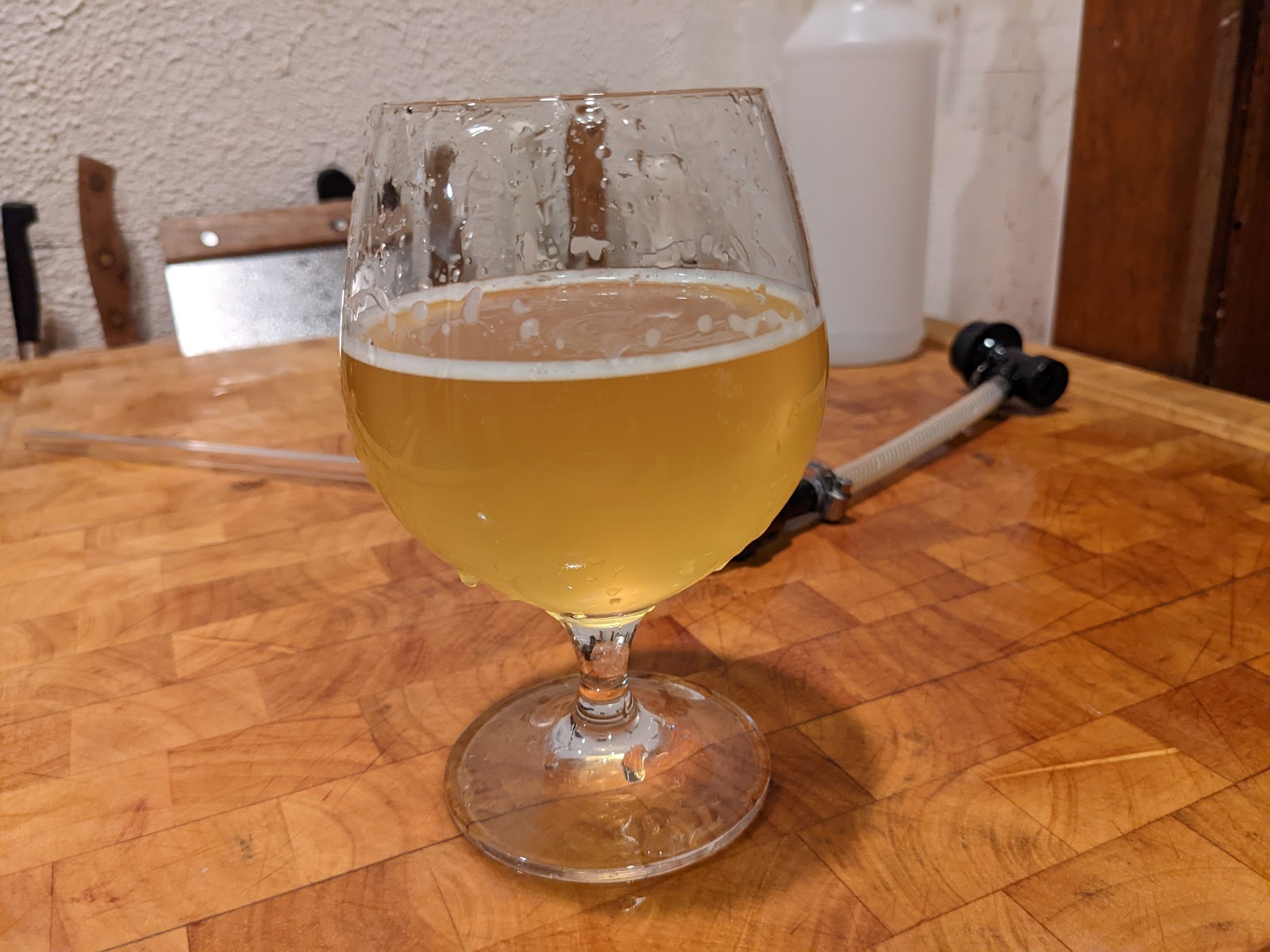 H was at the house to run tomorrow's Moreau Half. We each enjoyed some Cheerbringer Cider. H commented that it doesn't taste amazing, but it tastes exactly like it should. I liked that description. Both H and M mentioned something about it being a little watery tasting. I believe this is one of the peculiar aspects making cider from good eating apples. It seems like cider made from gnarly wild apples tend to be more full-flavored both before and after fermenting.

Over the last few days I chilled a mini keg of the cider in the fridge under 25-30 psi c02 pressure. After just a day or two I noticed that if I shook the mini keg, no more c02 went into the cider, so I think it's fully carbonated. I dropped it down to 10 psi for 12-24 hours. Then bottled it just now. It filled 12 good bottles, plus a bottle or two worth of overage. 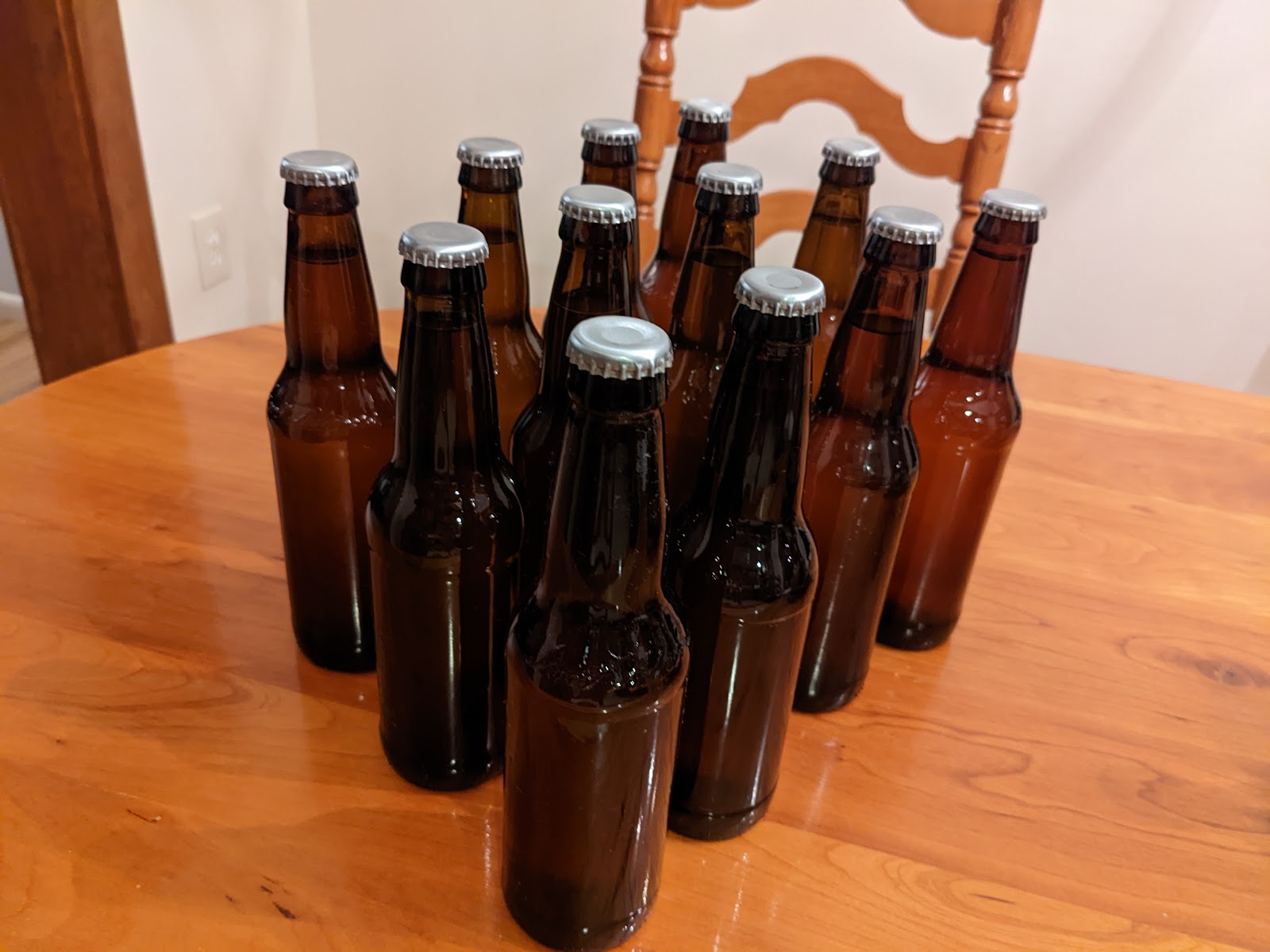 There was one last gallon or two of cider in the keg. I transferred most of it to a mini keg, and the remainder was transferred to Grolsch bottles.

After chilling and carbonating the cider, I bottled 10 bottles (plus two partially-filled bottles). I feel like these bottles taste slightly more 'off' than the previous ones, which is interesting. I'm not sure what would have caused that since it's all the same stuff, and was all handled roughly the same. Or maybe it just needs a little time to rest in the bottles, we can do a taste test between the two at some point.