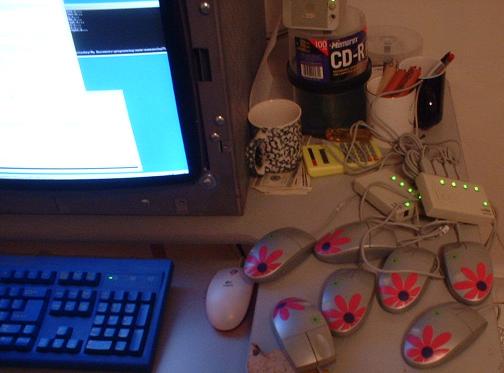 Raw Input is a Microsoft API that provides applications a way to accept raw input from any HID, including the keyboard and mouse. Prior to Windows XP, Microsoft supported using multiple mice independently with DirectX, however this method of using multiple mice was removed in Windows XP and newer. The new alternative is to use Raw Input, or Raw Mouse. The primary goal was to support multiple mice and lightguns in MAME, the Multiple Arcade Machine Emulator, but in the process a generic API was created that can be used in any application. This page provides source code and other information on using Raw Input for the following purposes:

NOTE: These will only run properly under Windows XP or newer.

Converting libraries from Microsoft Platform SDK to MinGW/GCC:
I couldn't believe it, but MinGW was able to use the Microsoft Platform SDK libraries, but it required some work on my part. Let me first admit that I never thought this would work, but my will was strong, and it turned out to be easy. First, I ran a program called, "reimp" (part of MinGW tools) on the MS Platform SDK "user32.lib" file. Reimp created my "libuser32.a". I replaced "libuser32.a" in my existing MinGW lib directory. Next, I moved the WinUser.h file into my MinGW include folder. I ran into 2 problems:

1) When I tried to include "winuser.h" into my programs, I got some compiler errors from "winuser.h" itself, so I made some very minor changes to the .h that might have been a little bit sketchy. With a few small changes, it compiled successfully.

2) Next, when I tried access certain features from the old version of "winuser.h" from existing programs (namely the existing Mame source), I got compiler errors again. I was able to copy lines from the old "winuser.h" into the new one to get it to work. Here's a specific example:
When compiling mame with the new winuser stuff for MinGW/GCC I was getting a compiler error: "GetLastError undeclared" (or something like that). I added a GetLastError line to the WinUser.h file, and wouldn't you know it? Mame compiled and ran without any noticeable problems! Now I aught to be able to freely add rawmouse code into Mame and compile it and test it.

The bottom line is that some functionality from any converted libraries is probably missing, and will somehow need to be added if you want to access more than what Mame and my programs use.

NOTE FOR MAME USERS: The Mame modifications explained here have been merged with the official version of Mame. If you are looking to use multiple trackballs, spinners, and lightguns in Mame using Windows XP then look no further than the official Mame page!

SUBNOTE FOR MAME USERS: Mame Analog+ supports Raw Mouse for some older versions of Mame, however it hasn't been updated in a while. AdvanceMame also supports multiple mice using RawInput.

This has become an issue because some of the members of Build Your Own Arcade Controls message board and I are stuck running crappy old Windows 95/98/ME on our Mame cabinets if we want to use multiple trackballs to play such great games as Marble Madness (2 trackballs), Rampart (3 trackballs), or Atari Soccer (4 trackballs). Lightguns are affected by the same problem, because Windows treats lightguns as mice (for the most part).

2006-03-09
RawMouse is now available in the official build of Mame! Woohoo!
Derrick Renaud has reworked the code from this site so that it fits cleanly into the official version of Mame. Multiple mice can now be enjoyed without using unofficial Mame versions. This is great news - The ultimate goal of this page has been accomplished. Read the announcement here. Get Mame from here.

2006-03-05
Fixed a bug introduced when compiling with the latest MS compilers (MS VC++ Express 2005 in particular).
It looks like the wm_input messages are not reporting the relative mode flag anymore (raw->data.mouse.usFlags & MOUSE_MOVE_RELATIVE). It looks to me as though I'm supposed to assume it's a relative device unless wm_input reports otherwise. That's an easy fix. In raw_mouse.c, in the function init_raw_mouse, initialize is_absolute to 0 for the sys_mouse and currentmouse. I have updated the source code (raw_mouse.c and raw_mouse_test.exe) with the small addition. While I was at it, I initialized is_virtual_desktop to 0.

2005-10-01
Rag Doll Kung Fu has been released on Steam.
Rag Doll Kung Fu, an exciting new game that uses the raw input code from this site, is now available for download through Steam! Enjoy playing with as many as 8 players using multiple mice! Find out more here. 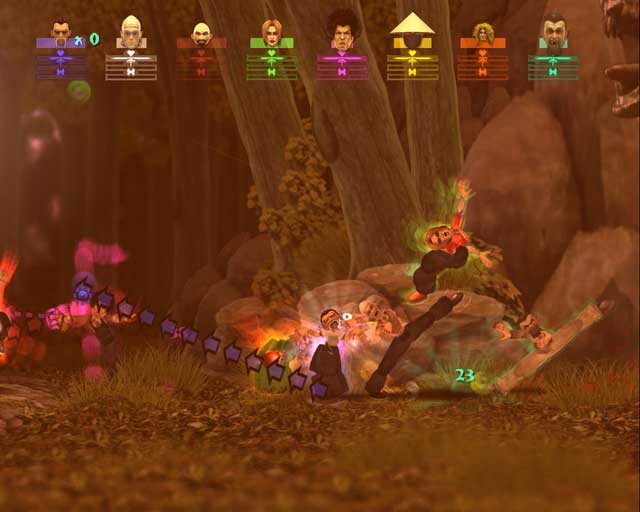 2005-04-24
MinGW now supports rawinput!
There is no longer a need for my winuser header/lib, because MinGW has them built-in. I updated the source files to work with the new MinGW from the Mame website.

2004-09-03
Rawmouse C# Port!
Peter Brumblay has ported the rawmouse code to C#! It consists of a dll and a demo program. As of right now, it will not support "absolute" devices such as lightguns and touchscreens. You can email him at:

See the downloads section for the files.

2004-04-23
Made a small change to yesterday's raw mouse api (raw_mouse.h, raw_mouse.c, and raw_mouse_test.c) update. I made OS detection a part of init_raw_mouse instead of making a separate function.

2004-04-22
Include RawMouse in an application without crashing under unsupported versions of Windows!
I have updated my raw mouse api (raw_mouse.h, raw_mouse.c). An exe will now run on versions of Windows that support raw input and versions that don't! The test program (raw_mouse_test.c) will now detect whether rawinput is available and exits gracefully instead of crashing. With this code, Mame Analog+ won't need 2 separate builds (one for Windows9x and one for Windows XP and newer) because it can detect which method of mouse input is available and choose accordingly.

The code was very kindly sent to me by Mark Healey and Alex Evens at Lionhead Studios. Mark emailed me awhile back because he's using my rawmouse code for his up-and-coming game, "Rag Doll Kung Fu". He has added support for up to 8 players using separate mice on a single machine. Sounds like a real mess! The game looks really incredible. You can check out the press release here, or go to the game's main website at www.ragdollkungfu.com. 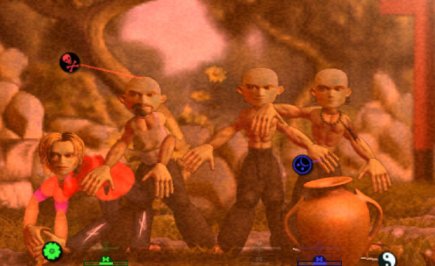 Great news! Atari (now owned by Infrogrames) has agreed to make their old arcade game roms available for purchase for use with Mame. This means that you can purchase copies of many of the multiple mouse Mame roms to play in your home!

Most of these games have been available in the past in such packages as the Digital Eclipse Arcade Collections, but this is different because it is specifically being sold to be used with whichever emulator you choose, such as Mame: Analog+ XP with support for multiple trackballs!

2003-9-18
Raw lightgun support for Mame! The raw mouse Mame code has been updated to work with one lightgun and should work with multiple lightguns. I can't test multiple because I only have one Act Labs PC USB Light gun. If it doesn't happen to work it'll be easy to fix.

2003-9-15
Raw mouse buttons for Mame! Finally something worth mentioning!

2003-9-12
Multiple raw mice in Mame! I created an interface raw_mouse.h and raw_mouse.c which can be included into c program very easily. I hacked the MameAnalog+ code (quick and dirty) to make use of this new raw_mouse interface, and it wasn't long before I got 4 mice to work in Mame using WindowsXP.

2003-9-11 11:40pm
I updated the MinGW/GCC lib and header files for "winuser.h" with a version that will successfully compile a runable Mame.

2003-9-11 5pm-ish
I managed to convert the raw input header and library files from the Microsoft Platform SDK (namely WinUser.dll/user32.lib/winuser.h) into something that MinGW/GCC can use. I converted PacManFan's program from C++ to C so that it will compile with the Mame MinGW compiler package (plus the updated winuser stuff) instead of Visual C++.

2003-9-11 Noon-ish
PacManFan sent me his C++ demo which displays mouse data for multiple mice via rawmouse. Thanks Steve!
I gotta love those flowered Barbie USB mice (99 cents apiece!!!) I wish I knew how useful they would be when I got them. Whoda thought I'd regret not buying more of them - I figured 20 would be enough.