Skip to content
I ran the Green Mountain Marathon in South Hero, Vermont this weekend. My left knee was really sore and prevented me from training for a few weeks before the marathon. It was sore before I started running this morning. However, after 5 miles or so it felt better. It felt better as my other knee and hips and things started feeling sore. I made it to the halfway mark without too much of a problem, although I was getting sore and tired. I think that is when my lack of training over the last couple of weeks took effect. The second half was all pretty difficult. Up until mile 18 or 20 or so I was sort of keeping up reasonably well, but I was dwindling. After mile 22 it was REALLY tough. I walked a lot. I walked hills, mile markers, rest stops (anywhere that I could justify a break). At around mile 24, I took a rest stop. When I move to get going again, my left knee felt pretty bad, and my system felt like it was failing - my head and particularly my ears felt really hot, and I had a cold sweat. I walked it off, and it passed. I did the marathon shuffle for most of the last mile. 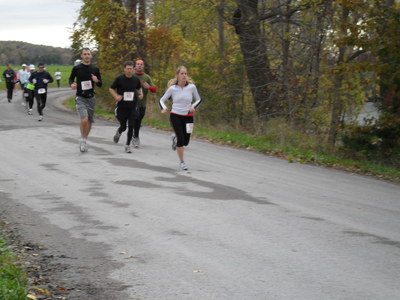 Overall, it was not a great run (from the beginning I did no feel very good, I had no confidence). Also, the only food on the course was 3 gooey packets. 2 of the packets that I took at first had caffeine. I drank a good amount. For the first half I probably drank a little cup of water or gatorade at every station (every 2-3 miles), and after that I grabbed 3 cups half-gatorade (which usually amounted to 1 full 12 ounce cup) at every station. I and took 4 or 5 bathroom breaks. 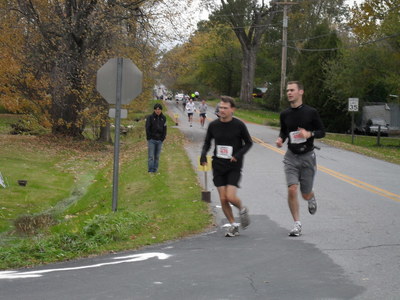 After the race, it was really hard to walk. My hips feel swollen, but not too bad. My knees are really sore, and it makes it hard to walk. My left foot hurts, just above the arch. I have one toenail that feels pretty bad. My upper body feels fine.

The race itself was really awesome. $25, a beautiful island run, and a nice long-sleeved cotton shirt to boot.