I have half a bag of Ruby Mac’s. I bought three bags of apples at DeVoe’s, each a different variety. One bag is Fuji’s which Alan said people really like for making cider because they have a high sugar content. I think that middle bag contains the Fuji’s (the reddish orange apples).

Alan was right, the Fuji’s were amazing! The cider just fell right out. It was three times easier and faster juicing those apples. Even better than the Ruby Mac’s. The other ones were brutal by comparison! They are just kind of mush and the cider doesn’t want to be extracted. Made quick work of it all, starting around 9am and was all done and cleaned up before noon. The cider looks great. I didn’t take a specific gravity reading, just because I was happy to keep the process as simple as humanly possible and not dip another device into the cider. I could have taken a measurement before I put it in the carboy, but that would only measure that one type of apple. 3.5 bags of apples perfectly filled the six-gallon carboy. I filled the carboy, dried the top, put a packet of yeast in, and put the airlock on. It’s now sitting downstairs next to the bookshelf. I love the minimalist process!

There is a layer of oxidized cider on top of this batch. I wonder if giving a squirt of CO2 would prevent this?

There are 16 seconds between bubbles in the airlock.

There is a very thick layer of sediment at the bottom. It's starting to clarify a little.

17 seconds between bubbles in the airlock. It’s looking pretty clear, and there’s a ton of sediment. I’m thinking about transferring it to the keg, even though it’s a bit early. It will get it off the sediment.

I transferred to the keg.

It filled the keg nicely, which I closed, filled with C02, and purged by releasing the gas three times. There was about a half gallon more that I siphoned into the gallon jug. I then poured the cider from the gallon jug into two green Grolsch bottles. I poured myself a glass. There are no off-flavors whatsoever. The flavor is mild, but otherwise seems kinda flawless. I can’t wait until it gets a little more time to clarify. I put it back in its place in the keg to finish fermenting, this time under pressure.

I think it could have used a lot more time at room temperature to finish fermenting, but impatience got the best of me, partly because it’s been warm out and there’s not much time left in the season to naturally chill the cider, and I don’t have a dedicated fridge I can use to chill the cider. I refilled my two twenty-ounce paintball CO2 tanks at Mohawk Army and Navy in Saratoga for five bucks a pop. Not bad!

At this point the cider is slightly cloudy. I sucked the sediment from the bottom, then force carbonated for a good twenty minutes or more, using my foot to roll the five-gallon keg on its side. Immediately after, it poured a bit foamy, but without much actual carbonation, then again the hose leading to the tap was filled with non-carbonated cider.

How does it smell and taste? There isn’t a hint of an off flavor. It smells nicely appley, and tastes like an unfiltered, cloudy dry white wine. Not that I’ve ever had something like that before. It lacks complexity, but is really quite good. It’s nice to drink now and I would speculate that it would only improve with time.

The next glass poured similarly fifteen minutes later - foamy, but without much carbonation. It will be good to let this sit and absorb the CO2 for a day or two.

Let’s be bold and ask: What am I disappointed about with this cider so far? I’m bummed that it has taken almost a month to get to this point, when a recent batch was this far along after about two weeks, and I can’t explain the difference except that the quick batch was a three-gallon batch. I scaled the amount of yeast accordingly, so I don’t know what made the difference. I’m psyched that force carbonating this batch didn’t result in pouring pure foam. And hopefully given a little time for the C02 to soak in, it will end up nicely carbonated but we’ll see. The flavor is mild. I feel as though previous ciders have improved tremendously if given time to sit and age. This cider has hardly finished fermenting, and will likely clarify given time.

I will say this. Tonight’s cider could use some serious improvement in terms of clarity, carbonation, and flavor. The first two will be clearly resolved with time. And probably the third. But if the worst case scenario is what I have now, I’m a happy man, and a successful cider maker!

I took the extra cider that was sitting in the 1-gallon jug and poured it into bottles.

It made one nice 6-pack to bring to A&H's this weekend. 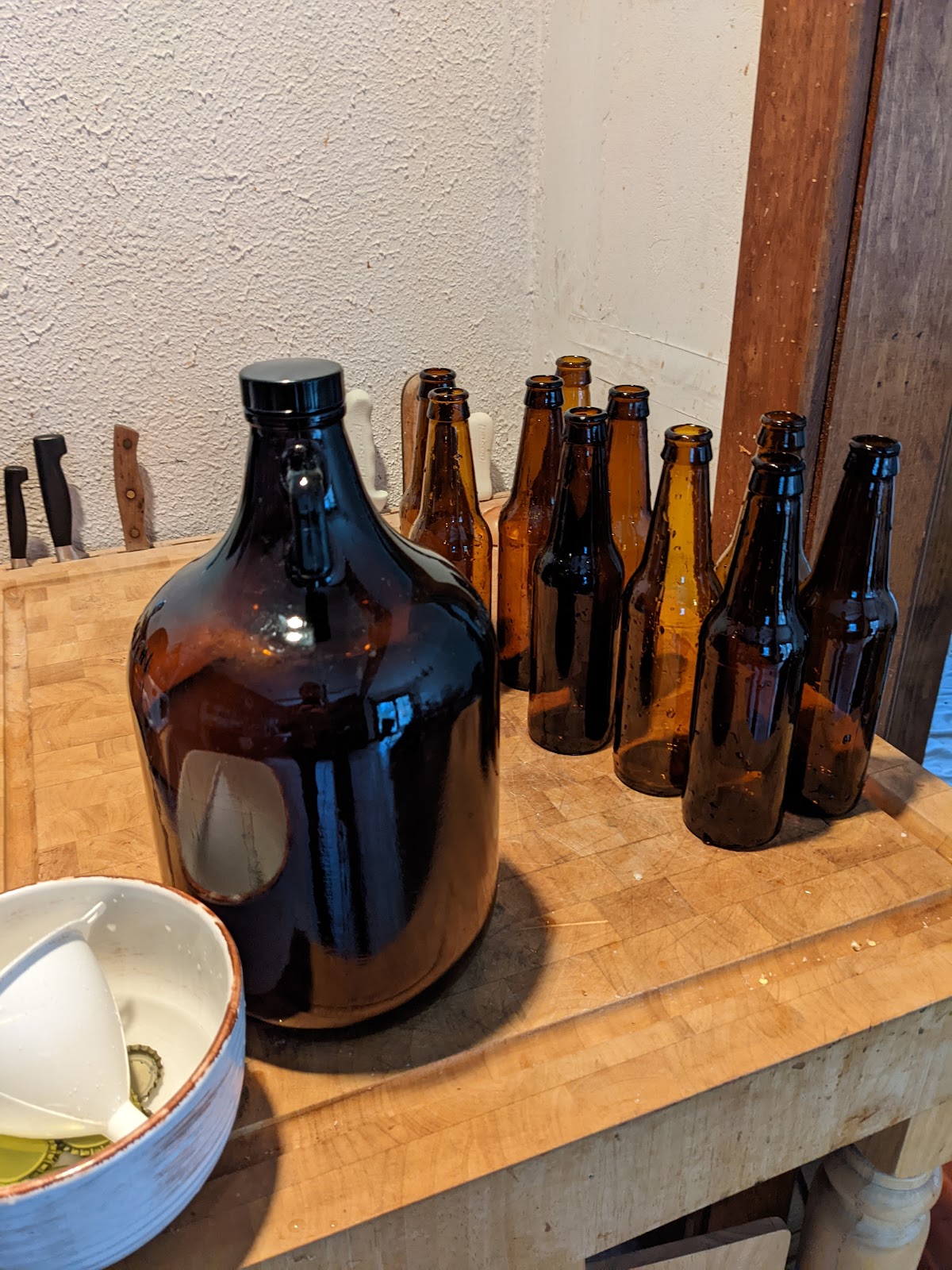 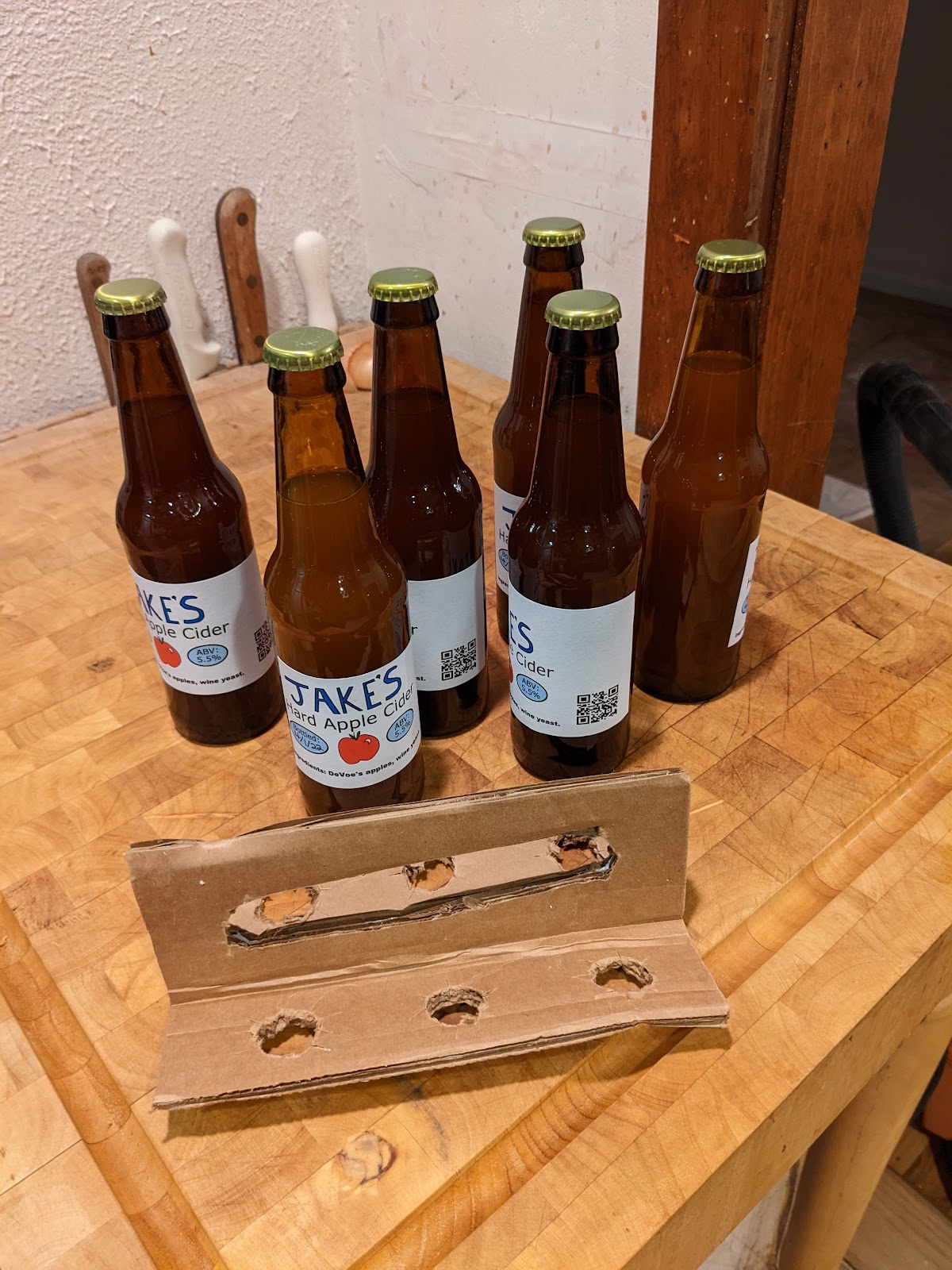 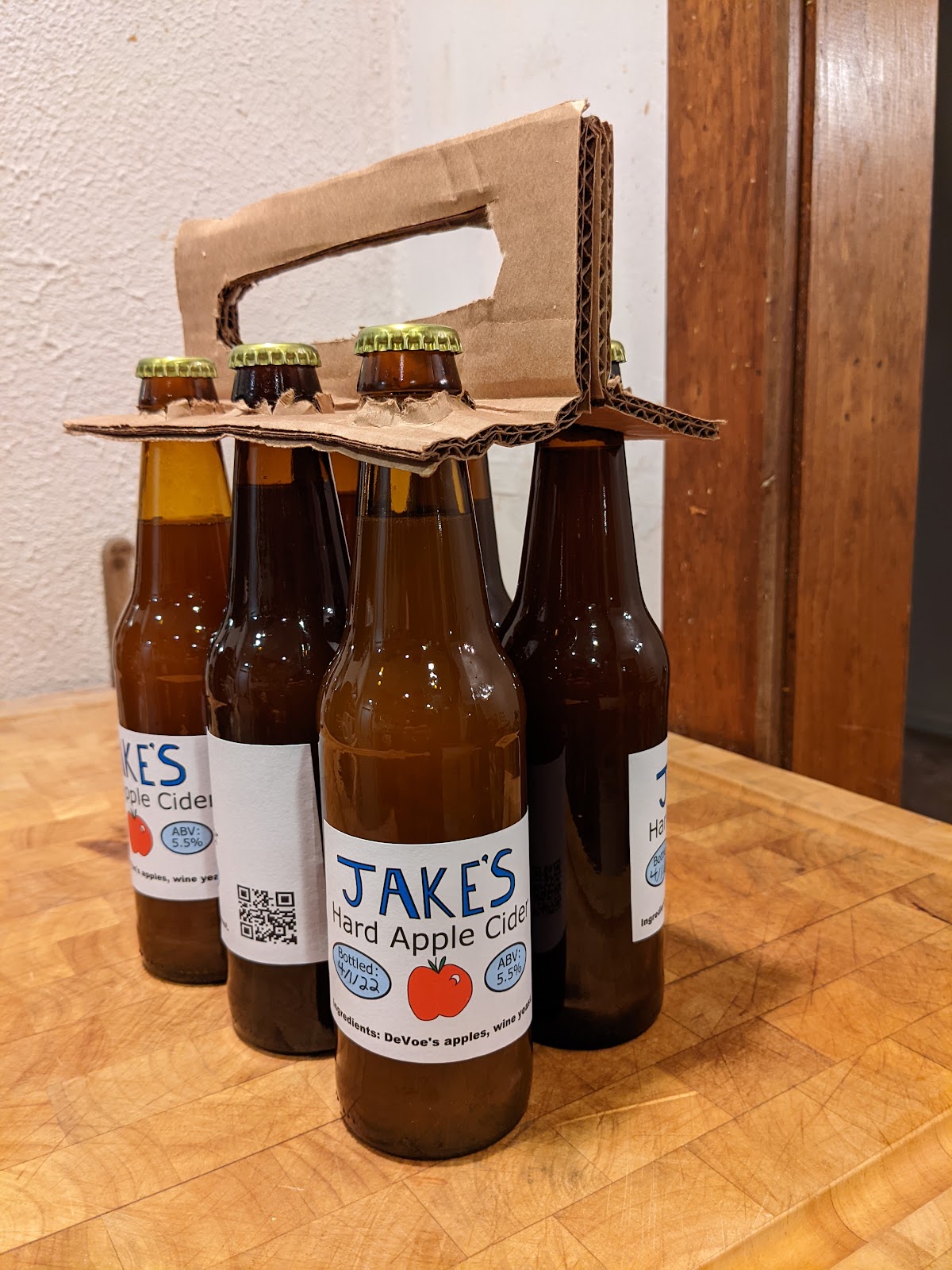